This past November, a lucky few of us at Telegraph had the unique opportunity to sit down with Coach Pat Dye and discuss the 30th Anniversary of the Iron Bowl coming to Auburn. But this was not just another day on the job; it was truly a dream come true for me, Kenslie McGuire and Seth Baird, all Auburn alumni and lifelong Auburn fans.

We were like kids in a candy shop—or maybe more like kids rolling Toomer’s Corner—as we walked into the Auburn locker room just days before the Iron Bowl for an exclusive interview with the Auburn legend. Coach Dye, joined by Auburn Athletic Director Allen Greene and former Auburn linebacker Craig Ogletree, shared his incredible stories and insight into that first home Iron Bowl in 1989 and everything it has meant to Auburn. 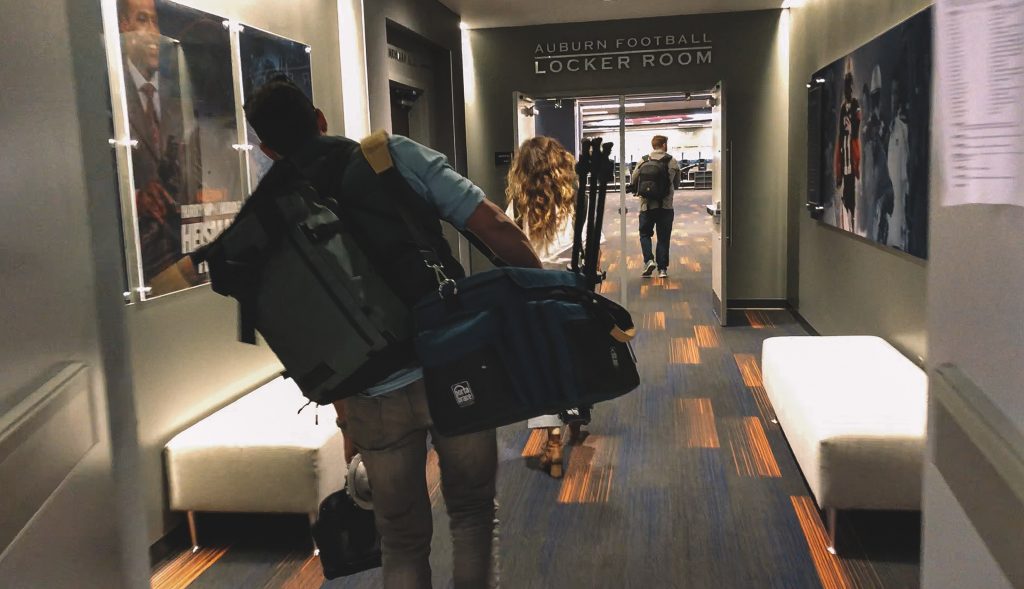 I grew up in the Pat Dye era of Auburn football and attended that 1989 Iron Bowl when I was 11 years old. I even held onto that iconic ticket from the game for all these years and asked Coach Dye to sign it for me after our interview. Hearing him recount not only every detail of that day and game in 1989, but also everything that went into moving the game from Birmingham to Auburn, was an experience I’ll never forget. He talked about so many memories from that day that echoed my own memories. 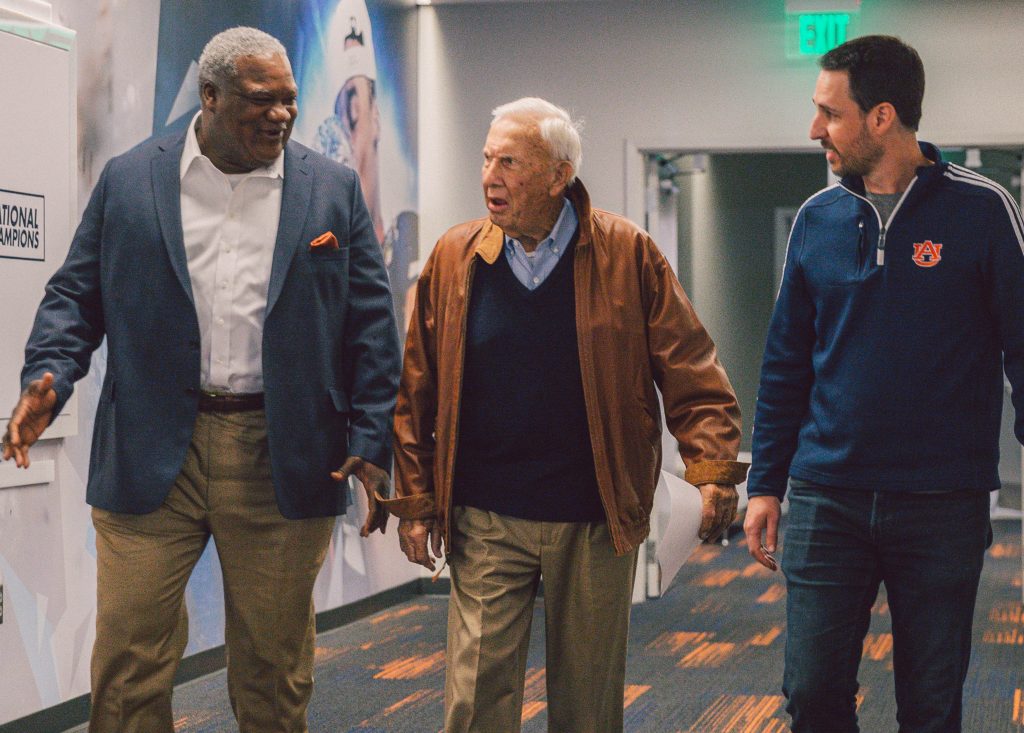 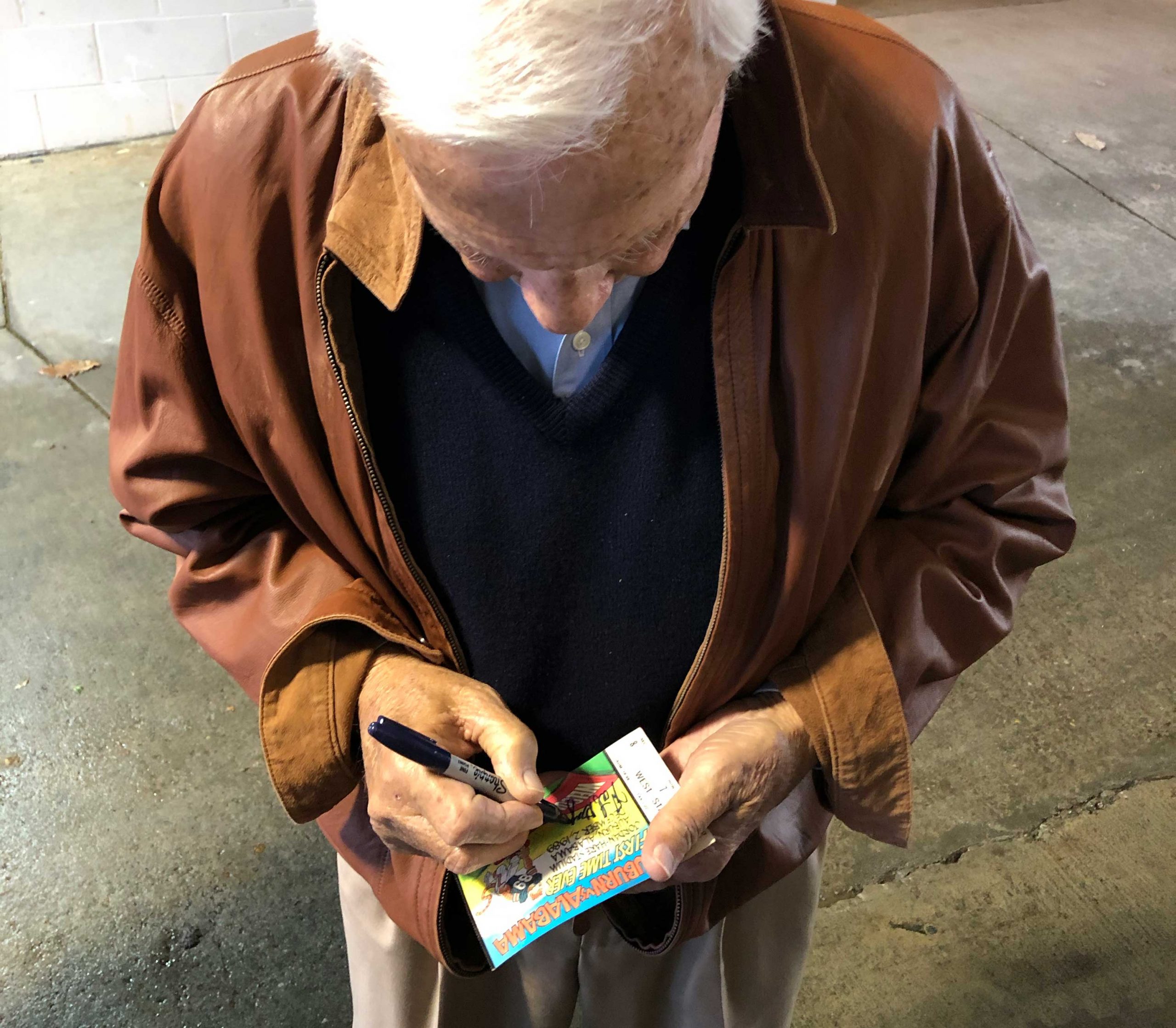 He talked about the Tiger Walk being so big that players, for the first time ever, had to walk single file down Donahue on their way into the stadium. He talked about the cloud of blue from the fans’ paper shakers rising up into the orange sky and how he would never forget that sight. He talked about the pass to Alexander Wright on the fifth play of the game and about how many rushing yards Stacy Danley had, as if the game had just been played the day before. As he told these stories, it was so apparent how intense his love for Auburn was and that Auburn had meant as much to him as he had meant to Auburn. Even more touching for me was how apparent his love was for all of his former players as he talked about them, and seeing through his interactions with Craig Ogletree how that love and respect was mutual from his players. 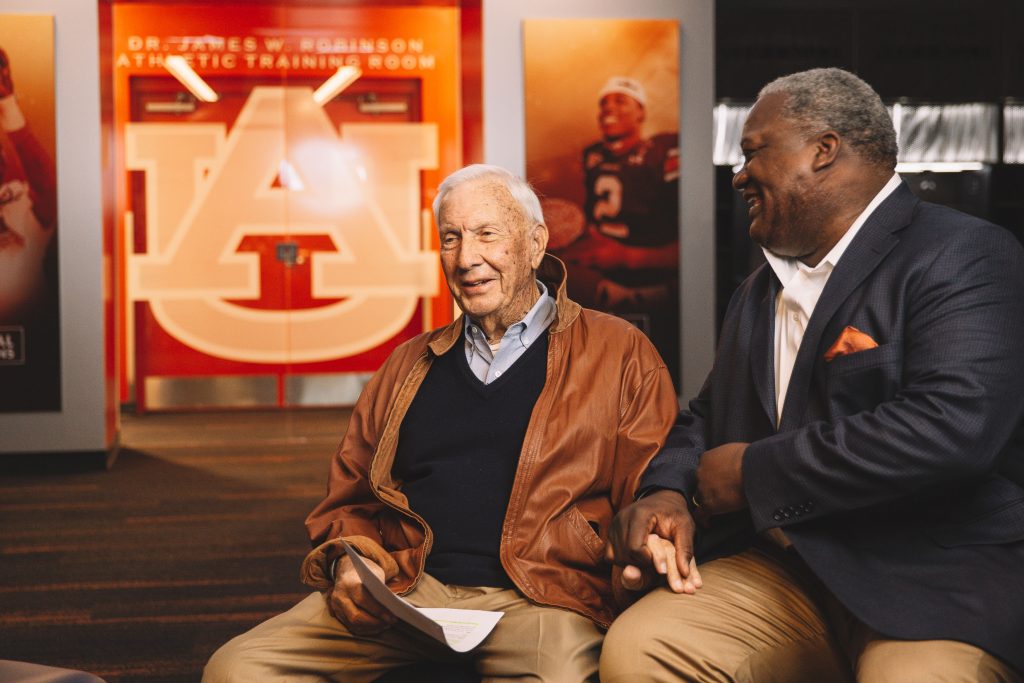 He made a point to mention the first time he read the Auburn Creed and how it resonated with him so deeply, saying “…it was right down the line with what I believed in. How you treat your fellow man. How hard you have to work.” He then said the line that most resonated with him from the creed was having “a spirit that is not afraid,” and that if you are afraid, you won’t ever get anything done. I think that sums up Coach Dye extremely well. He never backed down from any challenge or adversity and tackled everything head on. It was more important to him to teach his players the values that resonated with him in the Auburn Creed, and how to be great human beings, than it was to just teach them how to be great football players.

Kenslie McGuire recalls that after graduating from Auburn University, she made it one of her bucket list items to return to Auburn for a work project. 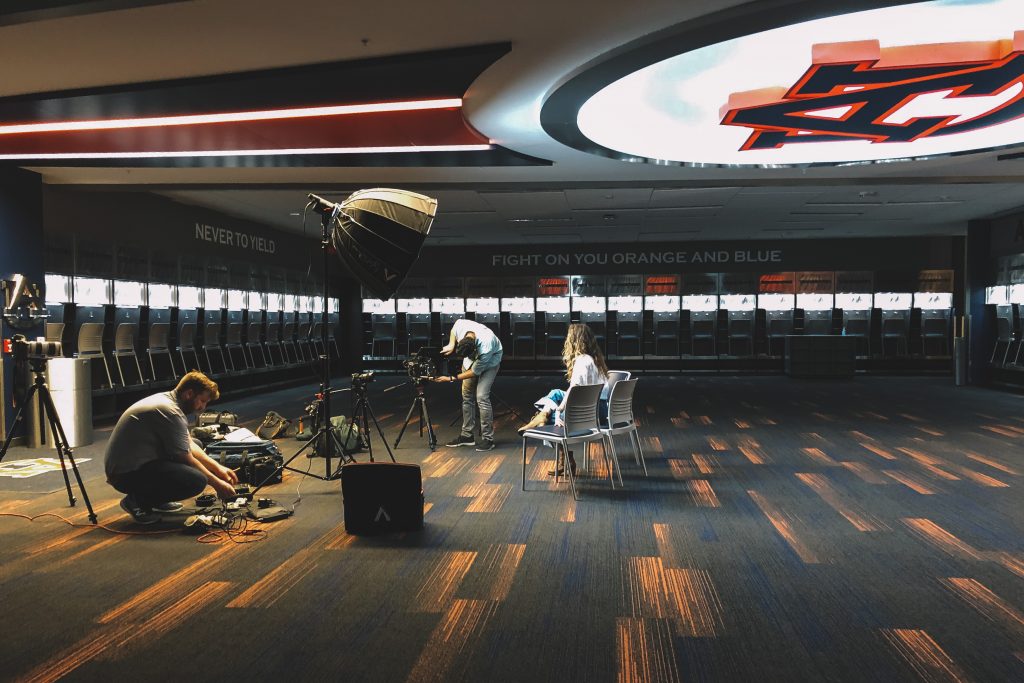 “As you can imagine, I was thrilled to hear we’d be interviewing Coach Pat Dye for the 30th anniversary of the first Iron Bowl played in Jordan Hare. My mom attended that ’89 Iron Bowl and bought a sweatshirt that I ended up wearing all through my college days. Such an iconic game!

Coach Dye is a true Auburn man. He treated coaching as a serious responsibility and developed a father/son-like relationship with so many of his players. Seeing him and Craig Ogletree interact was the sweetest thing. You can tell they had so many fond memories together that led to their lasting respect so many years later.

It was such a delight to meet Pat Dye and spend that afternoon with him, Craig, and A.D. Allen Greene. I knew it’d be an experience I’d never forget, but didn’t realize how special it would become seeing that we’d lose Coach so soon.” 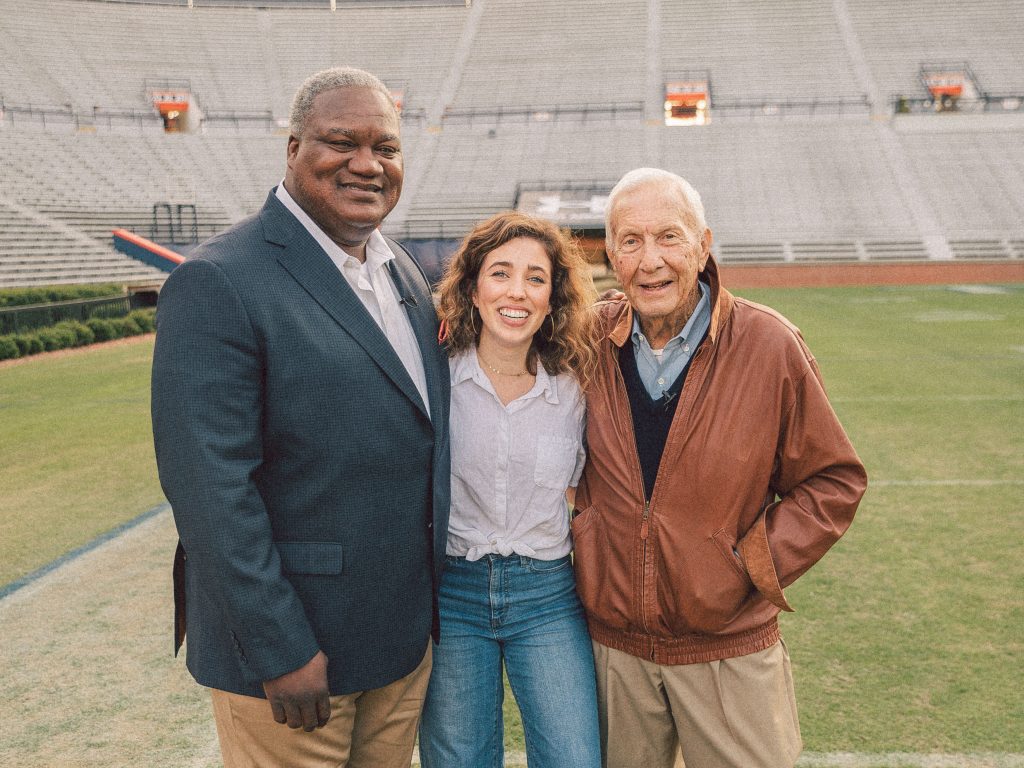 Seth Baird said that day was his first time getting to really meet Coach Dye.

“He was super nice and friendly. For him to take the time out of his day to sit down with us was awesome. I’d heard he was not only a great coach but a great man, and I got to experience that myself. It is something I will never forget. The way he told the story of the ‘89 Iron Bowl was like it happened yesterday. He seemed to remember every detail about that day. He made you feel like you were there in the stands. I could have sat there for hours listening to him tell stories about Auburn. We are going to miss Coach Dye.” 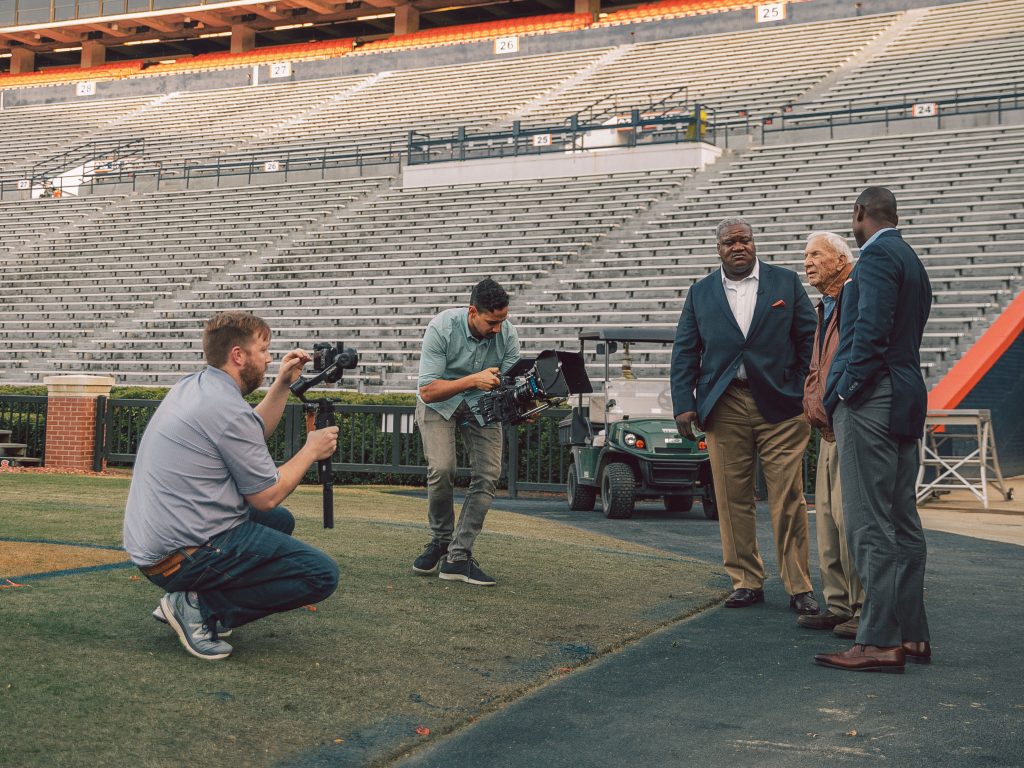 For some context, Auburn’s record versus Alabama prior to Coach Dye was 17-27-1. Since Coach Dye came to Auburn in 1981, that record is 20-19—including a 15-10 record against Alabama in games played in Auburn and Tuscaloosa since Coach Dye moved the game away from Birmingham and truly evened the playing field. Coach Dye’s contributions to Auburn are immeasurable. In many ways he is Auburn, both in the way he lived his life and in the path he paved for Auburn athletes, coaches, students and fans to come through his accomplishments on and off the field.

Coach Patrick Fain Dye the man may be gone, but legends never die, and he will live on forever through the Auburn family and in memories like the ones we recalled and made during our interview. Thank you, Coach, for the day we spent together and for the life you gave to Auburn, defining what it means to be an Auburn man.